Do you ever get an idea in your mind that you have to complete? Something you know will be super cool? Well, this Boneyard Lantern was one of those projects for me!

Last year I saw the Bone Yard Ceramic Hurricanes that Pottery Barn came out with for Halloween – very cool. I knew then that I had to try to replicate it in some fashion. While I ran out of time last year, I wasted no time in getting started for this Halloween. 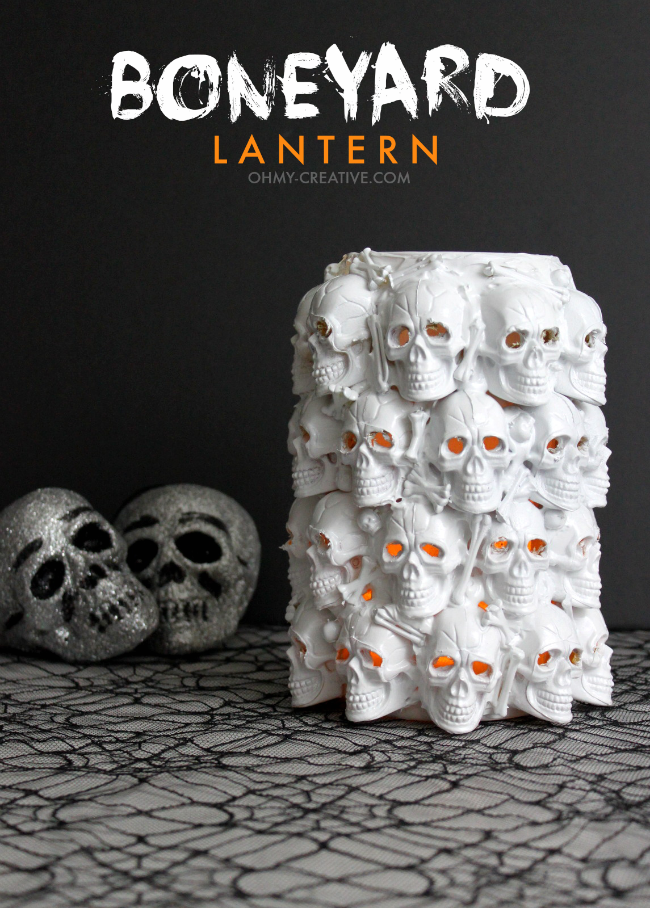 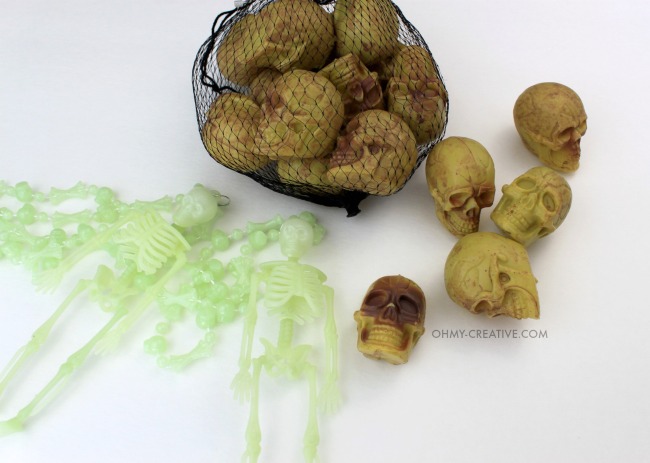 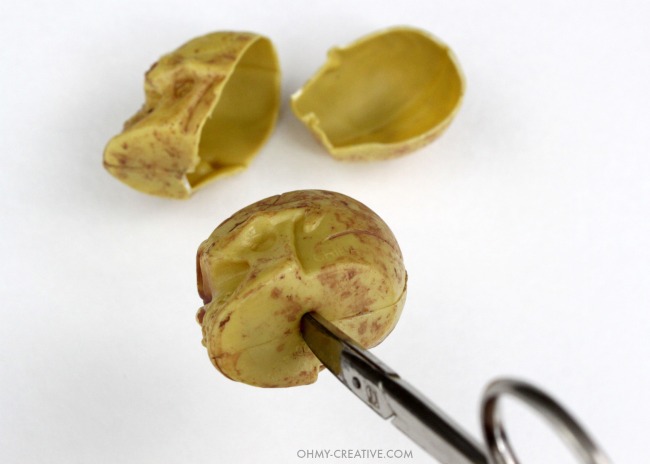 It’s time to cut the skull in half! I wasn’t sure exactly how to handle this. I first thought the skulls were too thick to cut through without sawing them in half, but to my surprise, they were fairly pliable. I have an old pair of cuticle scissors that I have used for years for crafts. Trust me…they will not be worth using on your nails once you have cut plastic with them.

I took the cuticle scissors and poked them through the bottom of the skull then repositioned them to cut around the skull. Occasionally the plastic got a little thick and I had a tough time cutting, but for the most part, it was pretty easy.

Once all the skulls were cut in half, I moved to the eyes. I wanted them to be cut out so that the light would shine through from the tea lights. I did this in two ways. I started to cut them out with an X-acto knife, but then my husband offered to drill them out using a drill. He placed a block of wood under the skull to drill into pushing out the eyes. They were a little raggedy this way, but for the most part, it did the trick. Plus…it was much faster! 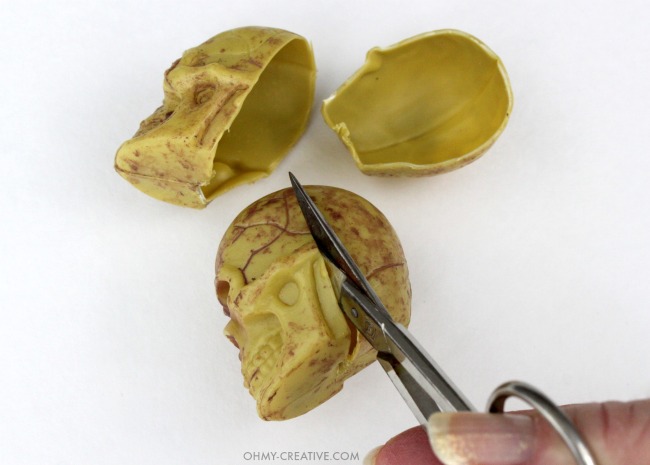 Now for the assembly…

I turned to a thick glue like Tacky Glue for this! A glue gun might also do the trick, but I didn’t try it with this project. If a skull loosens, I found that the next step, caulking will also hold the skulls in place. It’s trial and error. In the end, every skull was secure waiting for the magic transformation of the paint!

Since I was gluing the skulls to a cylinder instead of a flat surface, I took my time doing a row at a time and giving the skulls time to become secure. To move a little quicker, I secured the skulls with tape removing it when the glue was dry. 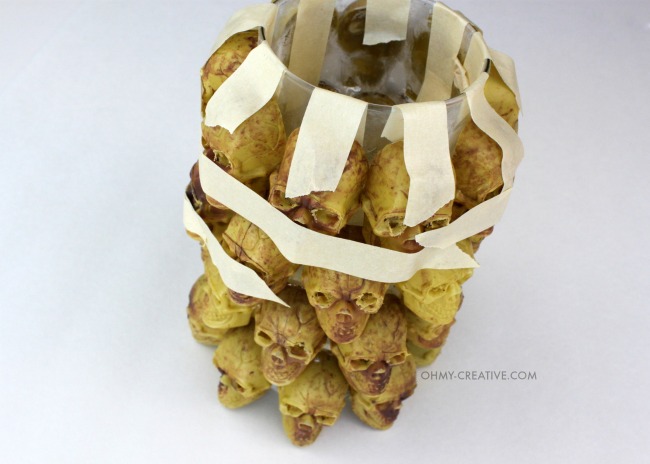 Now, remember, I am trying to put my own crafty spin on another candle holder. Theirs had a look of lumped together skulls and bones, and mine has perfectly placed skulls. How will I give mine that “squishy” pile of bones look? My craftiness thinking made me think of using caulking and the bones from the dollar store necklace. Use caulking that comes in a pliable tube where you can cut the tip off and use it.

It was easy to squeeze in all the nooks and crannies around the skulls, filling in all the gaps. I left the caulking uneven sticking on the extra bones that I cut off the necklace. I used all parts of the skeleton necklace to fill in the spaces. 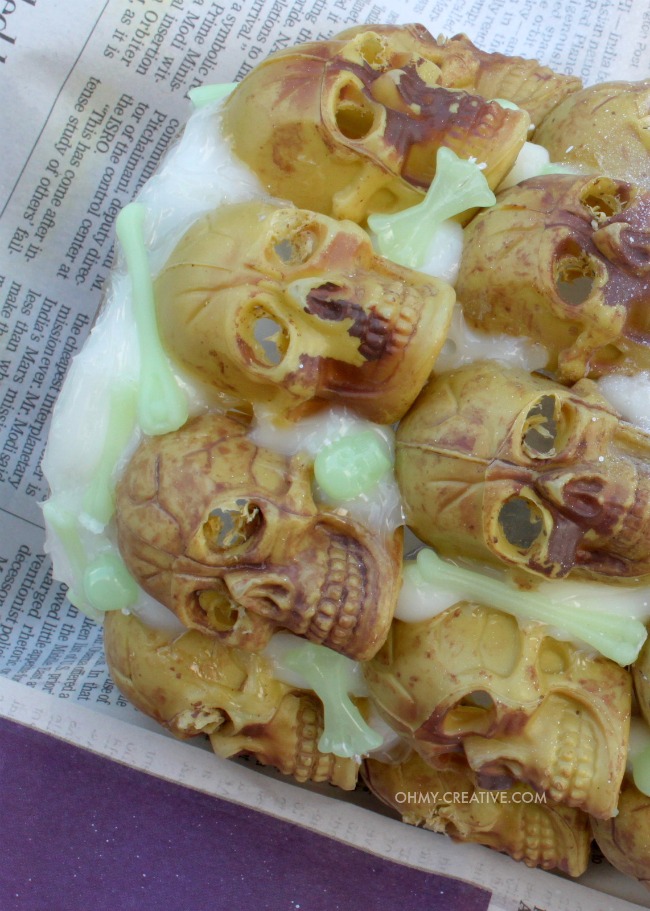 I know this is a little odd looking, but I was confident that it would look cool when it is finished. As always my husband was a little skeptical! 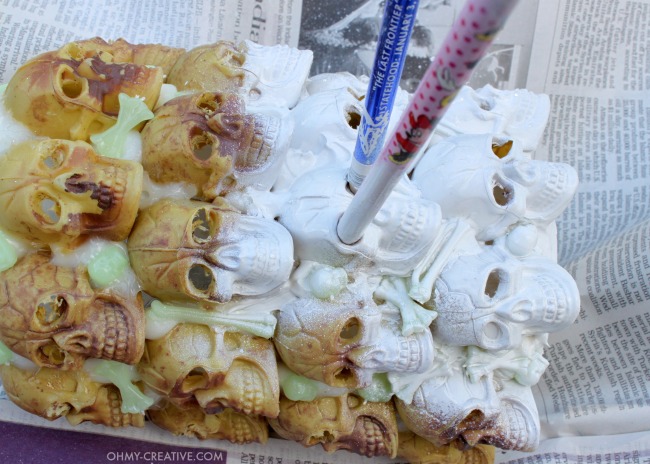 So, I knew it was going to be easy to spray this, but how was I going to stop the paint from going through the eyes and hitting the glass cylinder. Then it would be opaque, and the light would not glow through the eyes. I had to give this a little thought…you see my solution…

Yep…pencils! I moved them from eye to eye as I sprayed. They worked perfectly! 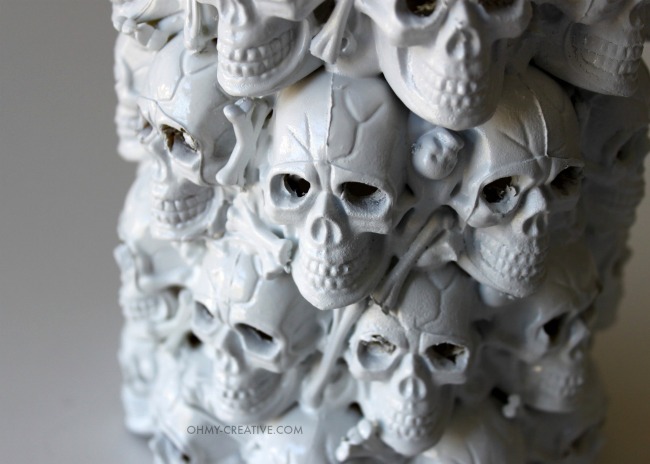 All the elements came together perfectly to create this DIY Boneyard Lantern! 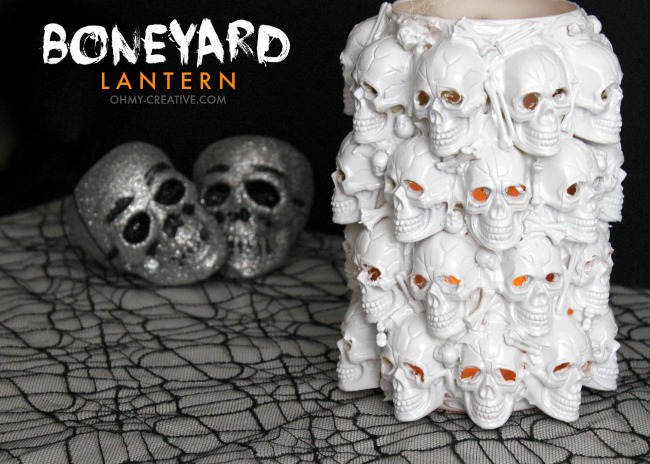 Drop in a couple of BATTERY operated tea lights for a candle light glow. This project is full of flammable products – NO REAL CANDLES PLEASE! 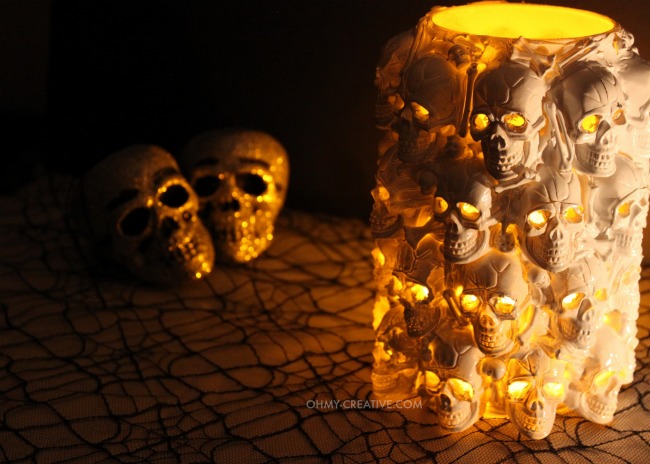 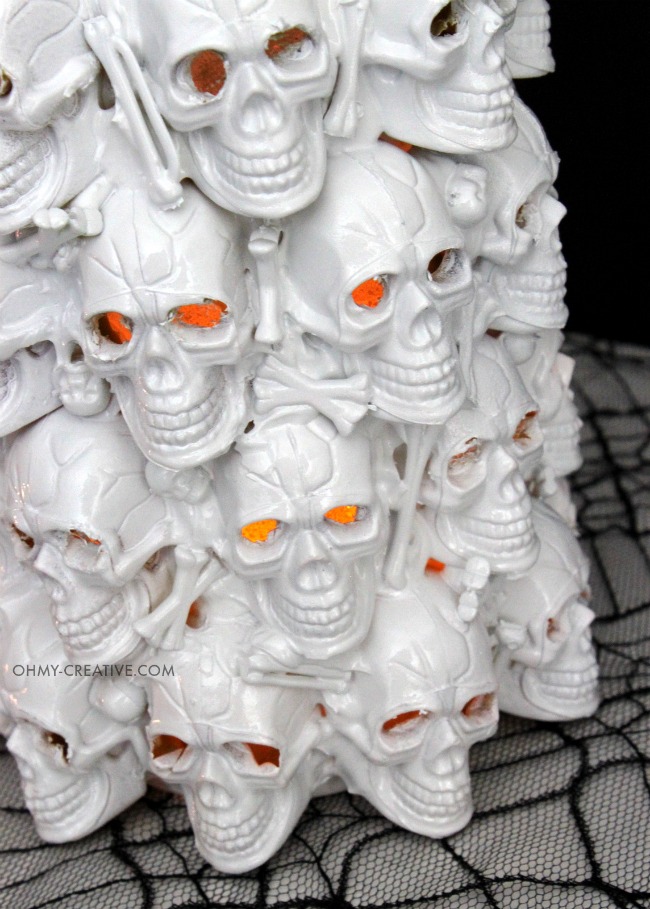 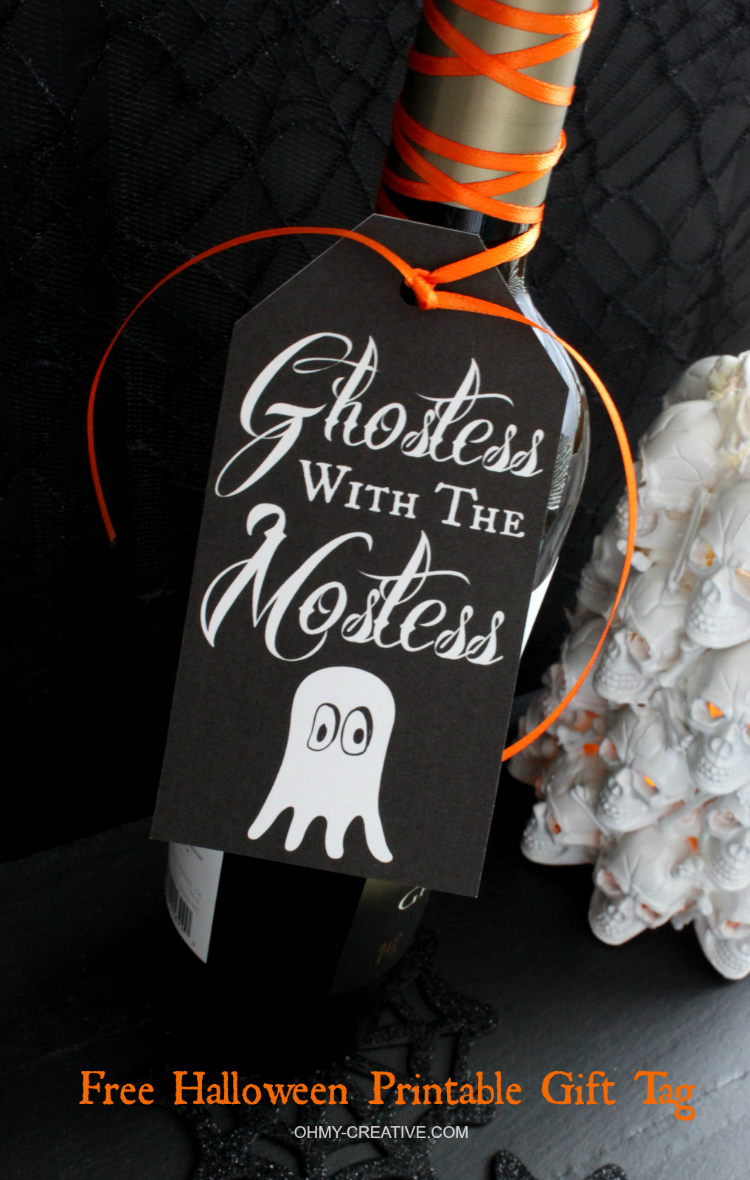 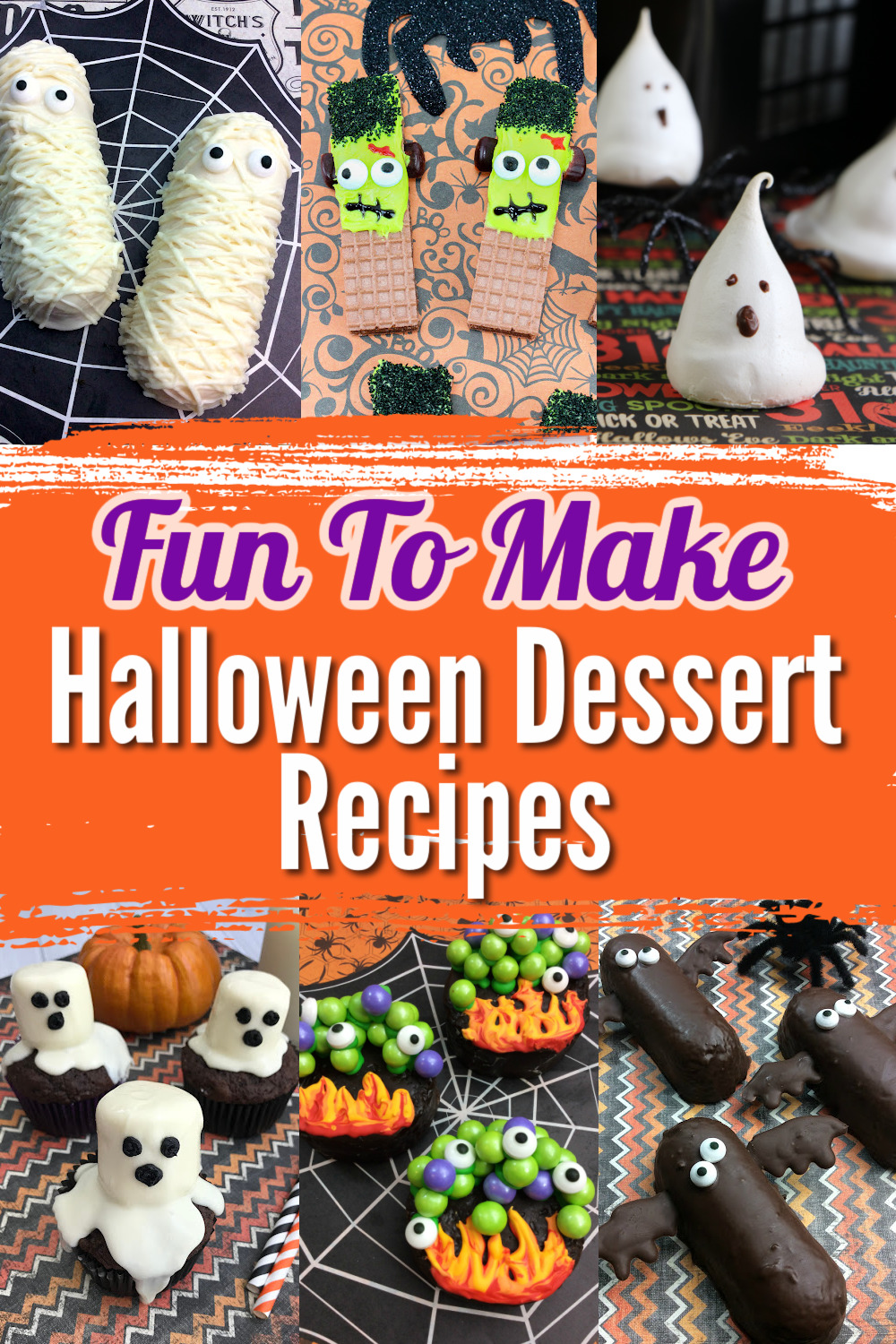 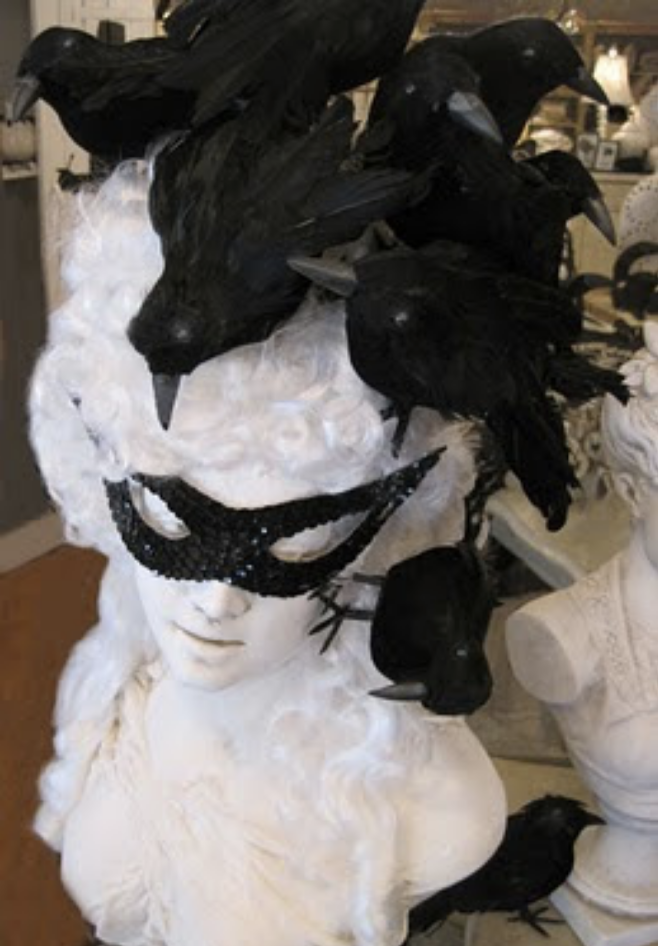 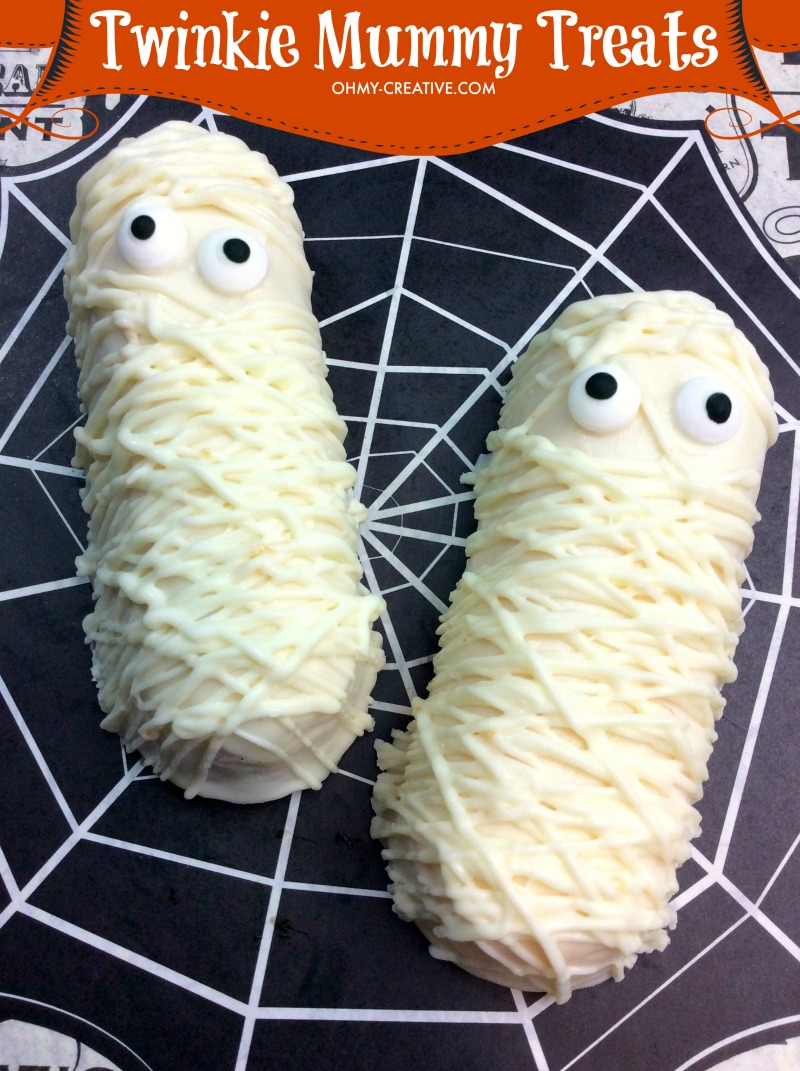 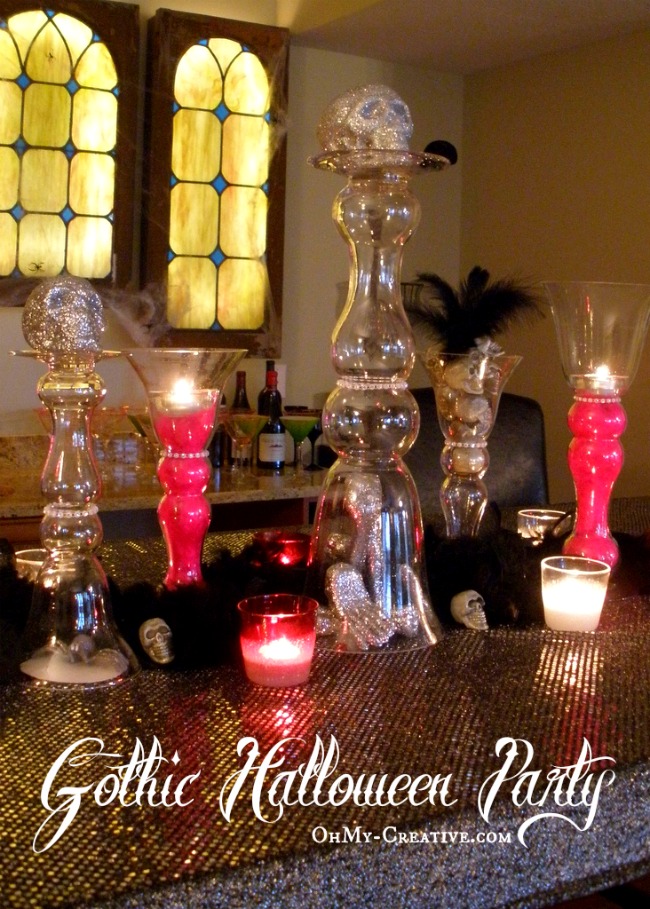